Brixton Hill Methodist is having some issues with its roof and gutters, so we have had scaffolding erected all around the building.  Robert Smyth, who is on the property team, asked if anyone would like to go up on the roof to take a look, with the promise that hard-hats would be provided!  I decided to take him up on this offer.  Needless to say, Robert and I climbed the scaffolding and the ladders rather carefully.  Once we reached the highest point, we walked along wooden planks to check out slate tiles that had slipped as well as vegetation 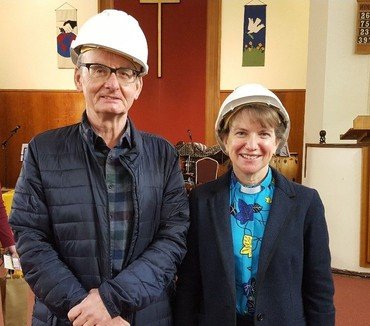 growing in the gutters.  We were able to see how pigeons have been entering an upstairs hall, making their home among the rafters, allowing their feathers and droppings to land on an old gym floor below.   The scaffolding surrounds the oldest part of the church building that dates back to the 1870s, so I’m sure that if the slates could talk, they would have a lot to say about what has happened underneath:  from school lectures, to jumble sales, to luncheon clubs, to Sunday School, To Christmas dinners, to nurseries…  The walls reverberate with sounds and voices that go back generations.

The building underneath those slates has been a place of warmth, of learning, of fellowship, of community, of care, of music, of worship and of growing faith.  At this point in time, the church building is in need of renovation and renewal.  In preparation for this, as a church, we have been asking ourselves:  How can this space continue to be a sign of hope and good news for the community at this time?

From my perch on the scaffolding, I looked around the rooftops of nearby neighbours and into walled gardens.  How often do we get a chance to gain a new perspective on our surroundings?   What discoveries can we make from a different vantage point?

If we are honest, we can say that the Covid pandemic has limited our vision to what is immediately in front us.  Climbing a roof allows for a more expansive view.  Where is God calling us?  How can we be expansive in the love that God has poured upon us?  Who are the people around us whom Christ wants us to see?  How is God revealing to us the needs of our neighbours in this pandemic age?

What is God showing you from your roof?

I would like to say a special thank you to the Lambeth Circuit for the gift of a three-month sabbatical (May-July).  Thank you to Rev. Andy D and Rev. Lena who helped to offer pastoral support to Brixton Hill and Mostyn during this time, and for all church members who took on extra responsibilities in my absence.

When my husband and I initially thought of this sabbatical time, we had rather ambitious plans that involved, among other things, plane travel.  Needless to say, due to Covid restrictions, we did not step aboard one aircraft!  Instead, our plans changed and brought us to a sabbatical that was probably truer to the essence of sabbath- rest, restoration, refreshment.  We spent time in places of natural beauty, from the Island of Mull to Cornwall.   To each of our stay-cation spots, we went loaded with books.  I chose to focus my reading on the writings of Dr. Howard Thurman (1899-1981).

Rev. Thurman was an African American who has often been referred to as the “saint of the Civil Rights movement.”  People have retreated to his words and leaned on his leadership for inspiration and meaning during times of heartbreak and struggle.  Martin Luther King used to carry Thurman’s book, Jesus and the Disinherited, with him when he travelled.  Thurman was a spiritual contemplative, mystic, teacher, mentor, preacher, poet, spiritual sage and seeker of social justice.  People turned to him for wisdom, and I decided that I would like to be one of them.  I wanted to find out more about The Fellowship Church for All People, which he helped to establish in San Francisco in 1944,  one of the first  interracial and intercultural congregations in the US that became an example of a diverse Christian fellowship for others.   Thurman believed strongly in the experiences and exchanges that pushed people beyond the artificial barriers of race, tradition, ethnicity and heritage.  He believed in acts of unity that showed the church bearing witness to overcoming barriers of race.  What was it about his leadership style that led him to be one of the founders of The Fellowship Church?  How did his contemplative approach lead him to a firm commitment to social justice?  How can this model speak to us in the Lambeth Circuit in 2021?  These were some of the questions I held as I read his books and his meditations.

He often spoke of his grandmother, who had spent the first twenty years of her life enslaved on a Florida plantation.  He said of her, “I learned more, for instance, about the genius of the religion of Jesus from my grandmother than from all the men who taught me …, because she moved inside the experience of the religion of Jesus and lived out of that kind of centre.”  With “a stiffening in her spine”, she would tell the following story:   “There was an enslaved minister from a nearby plantation who would come at least once a year to hold secret religious meetings with his fellow slaves on my plantation.”  Thurman continues, “How everything in me quivered with the pulsing tremor of raw energy when, in her recital, she would come to the triumphant climax of the minister.  ‘You are not slaves.  You are God’s children.”  Thurman said that this sense that the Creator of the universe created him, that he was a holy child of God, allowed him to absorb all of the violence that life would throw at him.  His grandmother helped him see that this was his true identity.  That was a starting point for his work at The Fellowship Church.  We are beloved children of God, holy, valued… with our place in the universe.  A good reminder for us as we seek in the Lambeth Circuit to be diverse Christian churches- for others!