EVERY BUILDING TELLS A STORY:   A HISTORY OF RAILTON ROAD METHODIST CHURCH

RRMC in Railton Road, Herne Hill, London SE24 has a long, interesting and fascinating history.  Early maps show Herne Hill (about 4 miles south of Central London) as thinly populated.  Today, the area is well populated and gentrified.  Although it does not have the elegant charm of Dulwich (to the east) or the vibrancy of Brixton (to the west), it is situated almost equidistant to those rather better-known areas.  It has its own history and character.  RRMC has stood in Railton Road since 1875.  The building, in its present form, dates from 1970.

The first church, an iron structure, opened in 1869, was replaced by a brick and stone structure that was 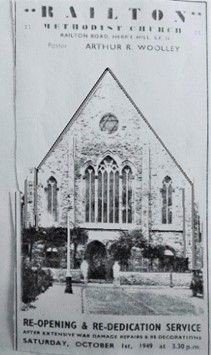 severely damaged in 1940 and demolished in 1968.  There were a number of non-conformist chapels/churches in Herne Hill and the Methodists were among the earliest in the area.  Attendance at churches usually depends upon allegiance, tradition, congregation, friends and community activity, however, this was not always so.

In 1836, Leicester born postman James Fosbery and his wife Mary opened their home for ‘cottage meetings’ of the local branch of the United Methodist Free Church.  It was at one of these meetings (1851), that William Booth (1829 – 1912) a full time shop assistant in a Pawnbroker’s shop in Walworth met Catherine Mumford (1829 – 1890), then living with her family in Russell Street, North Brixton.  The couple were married on 16th June 1855 at the Stockwell New Chapel.  Booth, at that time a Methodist Lay Preacher (later founded the Salvation Army), had come that day to preach.

In 1869 the ‘cottage meetings’ stopped when the congregation found a site nearby at 25-27 Milton Road and erected a ‘tin chapel’ there which was superseded in 1875 by the first Methodist Church building in Railton Road.  In 1883 James Fosbery, (aged 88), was presented with a large print copy of the Psalms in appreciation of his dedicated service to the church.  He died 4 July 1884 and is buried in Norwood Cemetery.  After his death, the house at 89 Dulwich Road was demolished.

In 1963 RRMC was the first of ten centres in and around London, embracing a Youth Club which was well attended by local youth but eventually closed many years later.  It was this youth club which proved to be a haven for young black men who were involved at the Brixton riots in the 1980's.  The rioters were encouraged to leave the streets and go to RRMC to join in more constructive activities and keep out of trouble.  Church members give a vivid account of the mass destruction of shops, offices and other buildings but RRMC was untouched.

Today, we house a day Nursery, after-care crèche and other facilities for young children.  Other activities include a Bible Study group on Tuesday morning and Bereavement Counselling for members and non-members.

The circuit office is based at RRMC and all are welcome in this church family.