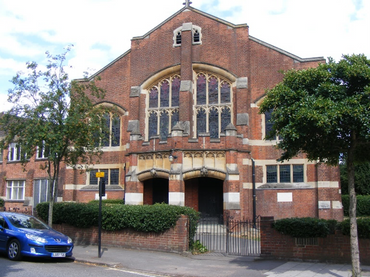 Methodism in Streatham began in the 1880’s with the building of the Wesleyan Methodist Church on Streatham High Road (where Sports Direct now stands).  It was a large Church built in the gothic revival style in 1882 at the initiation of the Wesleyan society in Brixton Hill.  At that time Methodism was still divided into smaller denominations which split apart after Wesley’s death.  The society in Streatham also founded a Mission Hall in Blegborough Road which is in West Streatham in the present day Borough of Wansdworth.  This became a separate society until its closure in the 1950’s.

In the 1880’s the United Methodists also founded a society in Streatham and built a Church in Riggindale Road in 1887.  The first building is now the Church Hall and the current Church Sanctuary was built in 1900 and opened in 1901.  It is now grade 11 listed and was designed by Wheeler and Speed in Art and Craft Gothic style.  The ceiling was the widest barrel-vaulted ceiling at that time.  The organ was also commissioned and built by the same builder who installed the organ at Liverpool Cathedral.

The airy interior is complemented by the windows, many of which are decorated with stained or painted glass.  The earliest windows are memorial to the Essex family – a prominent local family in Streatham the early years of the 20th century.

In the 1930’s the various denominations of Methodists united to form the Methodist Church of Great Britain so the three Churches in Streatham came under the same family.  During WW11 the High Road Church sustained serious damage and Services after the war could only be resumed in the Hall.  It was eventually repaired in the 1950’s. The present Riggindale Road Church was also damaged by enemy action and it’s activity curtailed.

By the 1960’s with growing resources needed to maintain two Churches in such close proximity it was decided after a careful review to close the High Road Church and so 1966 the Riggindale Road  Church became Streatham Methodist Church and proceeds from the sale of the other site enabled a refurbishment to take place and windows from the High Road integrated into the building here as a lasting memorial.

Since then the congregation here has waxed and waned like many traditional denominations.  We are now a very multicultural congregation with members drawn from the UK, the Caribbean and West Africa as well as members from Europe and the Indian Subcontinent.  Our membership is 65 and growing again and although small, folk are in good heart.  The Hall, small Chapel and downstairs rooms were refurbished a few years ago and we have plans to create a more accessible entrance when funds allow.  We contribute to our local Circuit, are proud members of South London Citizens and are proud custodians of this special building.  We are well used by other local organisations including the 4th Streatham Sea Scouts, a Table Tennis Club, 2 other Church congregations and a new Montessori Nursery.  We have a thriving weekly Bible Study and a monthly women’s fellowship and men’s fellowship.

‘WHERE GOD GUIDES HE PROVIDES’